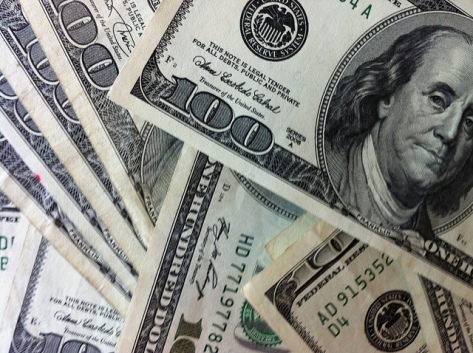 A Picture of Some Money. Image Source:ptmoney.com

No one will be surprised that the most common dollar bill is the $1. You likely have some of the 11.4 billion $1 bills currently in circulation in your wallet right now. What is likely not in your wallet is the second most common bill-the $100. There are nearly as many $100s as there are $1s. In terms of the monetary value, the $100 bill kills it, with about 80% of the all the value of cash coming from $100 bills.

Despite this prevalence, almost none of us use $100 bills in our daily lives. If we need to spend a bunch of money, we reach for our Visa or MasterCard instead. This is better. It gives us an electronic record of the transaction, removes the necessity and stress of carrying large amounts of cash, and might even give us some frequent flyer miles.  So if most people aren’t using $100s to buy things, who is?

A huge chunk of the $100s are outside of the United States, but estimates of what percentage that “huge chunk” is very widely between 25% and 75%. High denomination notes are attractive to the sort of people who do not want to keep their money in the formal banking system. This could because they do not trust their local banking system or currency, or it could because the money has been attained illegally. The people who really benefit from high denomination notes are those people who need to move very large sums of money (think millions of dollars) without the banking system.

Cash is particularly attractive to drug trafficking organizations, because they deal with large sums of money, and because they often have to move that money across international borders. In the largest drug cash seizure so far, $205.6 Million was seized by the Mexican government, virtually all of it was in genuine $100 dollar bills.  In 2010, currency exchanges in the UK stopped selling the €500 note due to their prevalence in crime. At the time, it was estimated that 90% of all the €500 euro notes in the UK were in the hands of organized crime. Some denominations continue almost exclusively in the hands of criminal organizations. The Canadian $1000 bill was discontinued in 2000 following a request from the RCMP, but about a billion Canadian dollars’ worth remain in circulation, essentially all in the hands of criminal organizations. High denomination notes make it easier to store money in cash, which helps with tax evasion, they also make it easier to engage to bribery.
Since cash must be physically transported, usually in a clandestine manner, there are benefits to using as a high a denomination as possible. A million dollars in $20 Bills weighs about 110lbs and takes around four briefcases. As anyone who has ever smuggled a million dollars in 20s through an airport[1] will tell you, that is an irritatingly cumbersome burden. Much better to take the million dollars in 100s where it will weigh only about 22lbs and could fit in a single briefcase, better still to take it in €500 euro notes where it would weigh just a few pounds and you could easily fit into the sort of bag the qualifies as a ‘personal item’ on Spirit Airlines.

A different picture of money

What notes should we get rid of?

Most high denomination notes are from the major rich country currencies. The two most popular notes in terms of illegal activity are the US $100 bill and the €500 bill.  These are attractive due to their high value, and the widespread use and acceptance of euros and dollars.

While there are higher value notes, the €500, €200, €100, and $100 notes are probably the notes that would have the biggest bang for buck (as it were) in making life more difficult for criminal organizations. However, eliminating high denomination notes of all currencies would be useful. Pretty much everywhere, high denomination notes are not widely used by the general population. The exception to this might be cash-centric Japan where the ¥10,000 note is used in normal transactions.

There are two basic situations where law abiding folks might want to have large denomination notes. One is storing money “under the mattress” or somewhere that is not a traditional bank account.  Even when this is not being done as a method of tax evasion, which is often the case, this does not seem a compelling reason to keep these notes. Unless one is storing many millions of dollars, storing it in 20s is not that much less convenient than storing it in 100s. I imagine that the number of people who are storing millions of dollars in legally acquired cash to be trivially small.

Another argument for legitimate use is that large denominations come in handy in emergency situations where normal financial systems do not work properly. This is especially true for refugees who will need to transport as much money as they can in some form of cash.  I do not know how much money the typical refugee travels with, but I would guess that it is not the sort of quantity that would be prohibitive to carry in $20 or $50 notes.  Wealthier refugees who would have large amounts of money to transport (a small minority) might also have more options about how they transport their wealth.

Seigniorage is the amount that a government makes from printing money. Central banks typically define this as the interest from bonds received from issuing new banknotes, minus the cost of making the banknotes in the first place.  Nothing of value is created in this process, but it does give the government a convenient revenue stream.

This ends up being a lot of money, especially for the United States. The seigniorage on US $100 bills is worth around $23.1 Billion annually. This number is directly related to two things: the amount of currency in circulation and interest rates.

Removing the $100 bill would not get rid of all of this 23.1 Billion, much of it would be replaced by seigniorage on $20 Bills or other smaller denomination notes. Exactly how big the end result would be is tricky to estimate, but something in the nature of $6 Billion is a reasonable guess[3]. That is a lot of money. However, the net impact of eliminating $100 bills would not be that great. Some of this will likely be offset by increased tax revenue as the cost of using cash transactions to hide taxable income increases.

It is also worth considering who is paying these billions of dollars. if the primary users of the $100 bill are people engaged in shady activity outside of the US, then the US government receiving money to essentially help facilitate these transactions seems questionable at best.

Finally, there is the simply issue of efficacy. Will the removal of high denomination notes actually make things tougher on the worlds criminals?  No one is suggesting that criminals will give up being criminals just because they can’t get large bills, but would it have any effect at all? There are lots of things that are easily transferable, anonymous, and valuable. Gold or diamonds are certainly possibilities, as are things like bitcoin.  While all of these are substitutes, they have their disadvantages: gold is heavy, diamonds are hard to spend, and bitcoin is volatile.

So far, cash has been preferred over these items. The best substitute for cash, has been different cash. In 2010 when the UK decided to restrict the use of the €500 bill, a 2012 report found that there was “a smooth transition by criminal organizations from use of €500 note to €200 note and high denominations banknotes in other currencies (particularly the $100 Bill).” This strongly reinforces the idea that for eliminating high denomination notes to be an effective irritant for criminals, there needs to be a multinational effort to eliminate as many of them as possible.

In parts of the world where there is little trust in the local currency, local banking system, or both, foreign currency is often seen as a way to securely store wealth. This partially explains the large amount of US cash that is overseas. This is a mixed blessing. It’s nice in that it allows people an alternative to a broken system, but in doing so slows the motivation to fix that system. This is especially true for the nations elites who have both the greatest power when it comes to motivating policy change, as well as best access to foreign currency.  As with the refugee case, unless one is regularly transporting very large amounts of money, storing wealth in 20s or 50s is not that much more annoying than storing it in 100s.

I like hundred dollar bills.  They are one of those special sort of things. Rather like an expensive car or a fancy drink, they make you feel like you are living a more exciting life just by being near them. There is this sort of wonder of having a relatively large sum in such a compact and easily spendable package. While I am in favor of their elimination on practical grounds, I will be a little bit sad if they go.

It is true, that the impact on any particular criminal enterprise will likely be slight, but this is a broad policy. Raising the costs of the major drug cartels and terrorist groups by even a percentage point or two could have a significant impact globally, given the scale of these operations. Combine this with even a slight reduction in tax evasion and the benefits are pretty compelling.

Additionally, there has never been a better time to do this. Improvements in electronic payments, mobile banking, and other alternatives to cash have made cash less important generally. Low interest rates mean seigniorage is less valuable than it has been in the past. We should do this, the sooner the better.

[1] It looks like people do actually smuggle large amounts of cash through airports. Though, they usually are a bit sneakier than just shoving it into their carry-on.

[2] The previous champion the 10,000 Singapore dollar note was scrapped in 2014 to prevent money laundering