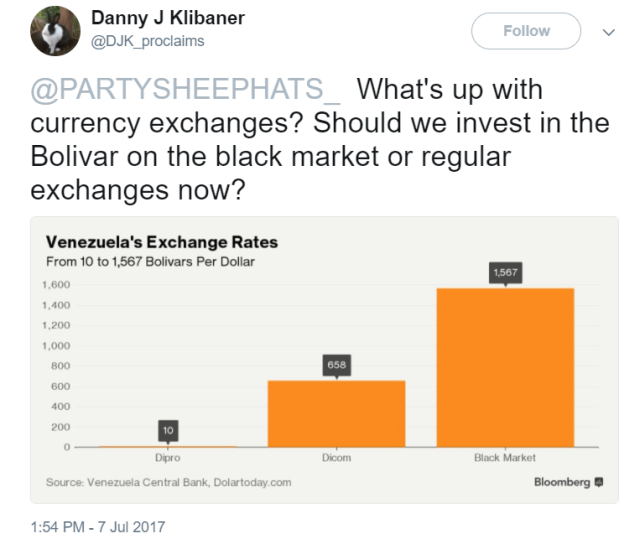 Currency markets are odd places. They are one of the few financial markets that are zero-sum. Politically, they can be odd as well, the good being exchanged is partially controlled by the government, some countries might want to keep the value of their currency high, others might want to keep it low.

These peculiarities aside, currency markets are fundamentally much like any other market. There are buyers, sellers, traders, and speculators. Like any market there is a single price which brings buyers and sellers together.

But not in Venezuela. 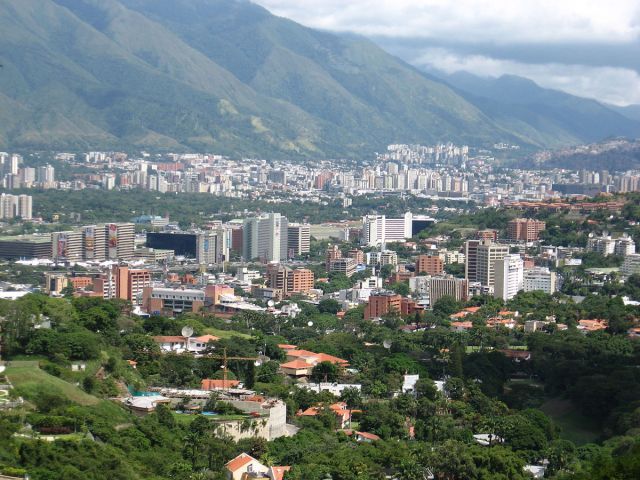 I got those rates by going to the exchange rate tracking website, xe.com which offers exchange rates for any currency you care to name[2]. I can find out that an Azerbaijani New Manat is equal to 37.9 Indian rupees.  Which is information that is unlikely to come in handy in my immediate future.

I can also see how much the Venezuelan bolivar is worth. According to xe.com one dollar is worth about 10 bolivars.

There is a catch. The catch comes, like so many do, in the form of some red text. Following the link that the red text masks brings me here:

Here, there is more red text. This red text is obviously serious, because it is preceded by the word “Notice”. There are three odd things about this, the first is that the official name of the currency is The “Bolivar Fuerte[3]” which means “Strong Bolivar”. Currencies are valuable because people believe them to be valuable, but it’s kind of unseemly to point that out in the title.

The last odd thing is the word “official”

Roughly speaking, there are three ways to determine the value of a currency: floating, fixed, or somewhere in between. A floating exchange rate means that the government does not set an official rate of exchange, instead it allows market forces to determine what the rate should be. Most major currencies including the US dollar and the Euro have their exchange rate determined this way.

The second way is to have a fixed exchange rate[5], in this case the government picks another currency, often a major one such as the US dollar or the Euro, and declares a value relative to that.

The third way is to have a floating exchange rate, but to put a lot of effort into buying and selling the  currency, to adjust the price. This is called a pegged float. When people complain about China manipulating its currency, this is what they are talking about.

Once a country has a fixed exchange rate, it is possible, though uncommon, to have multiple exchange rates for different sorts of goods. This might be done for a special type of commodity that is particularly important to the nation. For example, if a government wants food to be cheap, they could set the price for the foreign currency, used to import foreign food, to be cheaper than it otherwise might be.

Multiple exchange rates, is a way to subsidize imports, but an awkward one.  It has all the drawbacks of traditional subsidies (subsidizing the wrong thing destroys value). In addition, it requires additional bureaucratic process and enforcement, multiple exchange rates provide an easy avenue for corruption and arbitrage.

Venezuela has at least two official exchange rates. There is the rate at 1 USD = 10 bolivar, reserved for food and other essentials, but not available for most people or organizations. Then there is a new rate at around 1 USD = 2000 bolivars[6]. The scarcity of foreign currency makes getting currency at either of these rates very difficult.

The tricky thing about having a fixed exchange rate is maintaining it. When a government sets an exchange rate it is obligating people to purchase and sell their currency at the price they set.

There are a few things that can be done to prevent this.

The government can step in and buy their currency, or the currency they have pegged their currency to, to adjust the difference. This is fine, if the country has the resources to defend the peg. These resources typically come in the form of foreign reserves, which is the stock of foreign currencies that a nation keeps around.

Otherwise it could adjust the fixed rate, to make it more closely match up with what buyers and sellers think the currency is worth.

Lastly, a government can restrict access to the currency or simply make it illegal to sell a currency at any other price.

Or all the above.

It wasn’t always like this. In the early 2000s Venezuela had the fastest growing economy in the Americas, fueled by high oil prices, it had a larger foreign reserve than Canada, and was expanding social welfare programs.

During a strike in 2003, Hugo Chavez introduced currency controls, in an effort to prop up the currency and increase foreign reserves. At this point a dollar could be bought for 1600[7] bolivars, and sold for a bit less.

Thanks to the currency controls, to get the currency needed to purchase foreign goods, importers needed to go through the government. This was annoying, but not impossible, since oil is sold in dollars, the country had lots of dollars to spend.

Then two things happened: the oil price went down, and, with impeccable timing, Chavez died.

The fall in oil exports meant there was a lot less foreign currency available but Venezuela still needed to import most things, and to import these things people needed foreign currency.  When there is less of something, it usually gets more expensive. Yet under the official exchange rate(s) dollars remained very cheap.

This cheapness, meant that more people wanted to sell their bolivars for dollars, than wanted to sell dollars for bolivars. This made it difficult for everyone who needed it to get forign currency. Because it was difficult to get foreign currency through the official channels, a black-market emerged. The black market did not need to follow the governments set exchange rates. Nor did it. The black market rate and the official rate, began to diverge.

It is illegal to publish the black-market (aka parallel) exchange rate inside Venezuela. Thanks to a Venezuelan anti-government activist working at an Alabama Home Depot it is possible to get data on the black market rate.  The website dolartoday.com publishes a rate, based on reported exchanges in the Colombian city of Cucuta, just across the border from Venezuela. At the time of writing, that rate was a US dollar was equal to 8,493 bolivars.

While uncertain, that is the best measure of the actual value of the bolivar.  It shows that the currency has lost nearly all its value over the last few years. Even though the government no longer publishes inflation figures, Venezuela has officially achieved hyperinflation, with the u­­sual absurdities.

There is a certain tragicomedy in watching currency collapses from afar, but there is nothing amusing about the economic disaster underway in Venezuela. Food shortages, Medicine shortages, skyrocketing crime, unrest, helicopter attacks, are just some of the outcomes from the catastrophic policies that Chavez and Maduro have undertaken.

Thanks to @DJK_Proclaims for this question.

Have a question that doesn’t require an informed answer?

[1] Something, something, purchasing power parity, law of one price…

[2] I like it because it’s easy to remember the URL.

[3] Unless otherwise noted, when I say “bolivar” I am referring to Bolivar Fuerte.