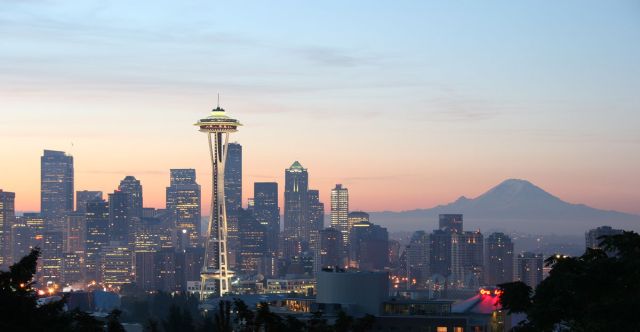 Last month, researchers at the University of Washington published a paper evaluating the increase in Seattle’s minimum wage. The paper suggested that the increase of the minimum wage to $13 per hour had harmed low wage workers. Minimum wage advocates sharpened their hatchets and went about trying to hack the paper to bits, while minimum wage opponents waved it about gleefully.

They can’t both be right.

Anyone who has ever walked into a store with the intention of buying something, seen the price, and walked out of the store without buying it, is familiar with the idea that when things get more expensive people buy less of them. Those deciding to hire people are no different, all else equal, an increase in wages should result in fewer people hired.

One doesn’t have to venture very far into minimum wage comment threads[1] before someone starts talking about the econ 101 price floor model. Which goes something like this:

A Graph with no Numbers

Pretend that people are buying and selling corn[2] at a price of $2 per corn. Then the government comes along and decides that since corn farmers deserve more money, all corn can only be sold for $3 each. Some people buying corn are not bothered by this, they like corn enough that even at the increased price they are happy to keep buying it. Other people decide that $3 is too much for corn and they decide not to buy it. Corn farmers love this policy, and they decide that since their corn is now going for more, they will try to harvest even more of it. Farmers turn more of their fields to growing corn, Uber drivers taking up corn farming as their side hustle. The result of this is that as less corn is bought, more corn is available for sale. This gap results in a surplus of corn, which just sits around, unbought and lonely. Aside from the farmers who manage to sell their higher priced corn this is annoying for nearly everyone. Corn buyers are mad because they must pay more for their corn. The government is mad because the country is now clogged with unused corn. Corn storage facilities are stoked.

Perhaps the same model can be applied to labor. Pretend there are a bunch of people willing to work for $10 an hour at fast food restaurants, and that fast food restaurants are happy to hire these people at $10 an hour. Then the government, feeling that $10 an hour is not enough money for people to live on, comes in and sets a minimum wage at $15 an hour. At $15 an hour many people are willing to work in fast food restaurants. However, the restaurants are not so keen to hire people for $15 an hour, so they decide to hire fewer of them: they might cut back on hours worked, decide not to hire new people, lay off current employees, they might even try to automate certain jobs.  This gap between the amount of labor supplied, and the amount demanded, is unemployment.

This is fine, but a bit theoretical. Why trust a graph with no numbers, plus some simplistic assumptions, when we have actual real-world examples of real-world minimum wage increases and data on employment.

A simple analysis would be to compare places that have raised the minimum wage with those which have not. This problem with this is that places that raise the minimum wage are likely to be different from places have not in myriad different ways. They are likely to be wealthier, more urban, and have other progressive policies, any of these things may influence employment.

It is also tempting to look at the changes before and after a new minimum wage is introduced, here the complications persist.  For example, the minimum wage might be increased because the economy is particularly strong, which might make it difficult to determine if the observed impact on employment is due to changes in the policy or underlying economic trends.

To really know what impact an increase in the minimum wage had on employment, it would be necessary to have one place that increased its minimum wage and other place that is exactly like the first place in all respects, except for a lower minimum wage. This will never happen, but it might be possible to get close.

Enter David Card and Alan Kruger, a couple of economists who wrote what is probably the seminal empirical paper about the minimum wage. Card and Kruger looked at an increase in New Jersey’s minimum wage up to $5.05 an hour. They examined the change in the number of people employed in fast food restaurants[3] in New Jersey compared to eastern Pennsylvania, which had not raised its minimum wage. New Jersey and Pennsylvania share a border and, at least near the border, things are likely to be similar with respect to things like underlying economic conditions.

They found no increase in unemployment.

More studies followed, and Card and Kruger weren’t the only ones finding this. As an oversimplification, empirical studies have shown that the minimum wage does not make unemployment increase.

Seattle has been increasing its minimum wage in steps for the last few years. The rate varies on employer size and if workers are offered health insurance. When Seattle increased its minimum wage to $11, the researchers watching, found there was little impact on employment, and what employment loss there was had been, was compensated by the increase in wages.

The study on the jump from $11 to $13, has gotten a lot of attention, although it has yet to undergo peer review.  It is unusually interesting, the researchers had access to an exceptionally rich dataset that included not only wages but hours worked for employees across Washington. This is better than other studies that lacked data on individual jobs and had to use proxies for minimum wage employment such as restaurant employment or teenage employment.

The primary finding is a nearly 10% reduction in the number of hours worked at low wage jobs. This was sufficiently extensive to counteract the increased wages that were being paid, resulting in the average low wage worker making $125 less than they otherwise might. There was also a noticeable drop in the number of low wage jobs. There was no clear indication of a decline in employment (among all workers) in the restaurant industry.

If the conclusion is to be believed, it implies that the the minimum wage was harmful to low wage workers, and this is likely to manifest as a reduction of hours rather than a reduction in overall employment.

There is debate about how seriously to take this study.  One of the concerns is the rich dataset that the study authors used. While exceptional in that it provides hourly data, this data is only available for the state of Washington.  Since Seattle is in many ways unique in Washington-it is vastly larger than any other city in the state-this forces the authors to use other areas of the state as a control group[4], a process which may not have worked.

The dataset used only classifies companies by one address, this means that it is impossible to determine where job losses occurred for companies that contain multiple establishments.  Since there was no way of distinguishing between job losses in Seattle vs. other regions, the authors felt compelled to exclude companies that had multiple outlets.

This is a problem for the results of the study if one believes that companies with multiple establishments are less likely to reduce employment following a rise in the minimum wage[5].

Still, it’s suspect, many companies that employ minimum wage workers have multiple establishments (fast food restaurants are the obvious example). Even if this nullifies the application of the results for businesses in general, they remain valid for the subset of single location-businesses.

Near when the Seattle minimum wage study was published, another study came out arguing that the increase in the minimum wage had not impacted employment in the restaurant industry. The two studies were often presented as being at odds with each other (an example), even though there were few explicit contradictions (for example, neither showed a decline in employment in the restaurant industry).

What to do with empirical studies?

I was upset with the reaction to this paper. Minimum wage proponents were so quick to dismiss it offhand, while minimum wage opponents held it up as proof of something that didn’t need any proof. Both of these responses are silly.

Empirical research should inform policy decisions. The alternatives are theory, guessing, or making stuff up[6]. In the real world though, empirical studies only ever answer questions in bits. Data limitations, methodological decisions, and the fundamental complications of an interconnected society, make it impossible for a single study to ever concretely answer a research question.

Relying on empirical studies to inform our policy is going to be messy. For contentious and heavily studied policy issues-like the minimum wage-there will be papers that support either side of an argument. It will be possible for anyone to cherry pick valid, yet imperfect, studies that support their argument, regardless of which side they are on.

This doesn’t mean all studies are automatically equally valid, or equally important. Nor does it mean every study should be taken at face value. It is necessary to debate the flaws and inconsistencies of any political or academic work.

What is dangerous is doing this selectively, slashing to ribbons everything you disagree with while giving favored conclusions studies a clean pass. The reason this piece is so awful is not that it’s critique is unfounded, but it calls for people to ignore a study, without even giving it a chance.

As more minimum wages rise there will be more empirical studies, and hopefully quantity will bring consensus, or at least, a more nuanced understanding. In general, the empirical evidence on the minimum wage has not shown large reductions in employment, this study does not reverse these findings, nor do those findings invalidate this study. When is the minimum wage too high? is an empirical question, but an unanswered one.

How much Consumer Surplus does Uber generate?

[2] Agricultural goods have often had a price floor.

[3] Fast food restaurants are often used to study minimum wage, because they employ a lot of minimum wage workers, tend to follow these sorts of laws, and their workers tend not to get tips.

[4] Technically they use methods called Synthetic control and interactive fixed effects. I am not sufficiently familiar with these techniques to judge their efficacy or appropriateness. From my understanding, both techniques weigh different regions in ways that their trends prior to the changes in the minimum wage, would be the same. The assumption is that without the impact of the minimum wage laws, the weighted combination of regions offers an appropriate control.

[5] Hard to tell off hand if this is true, multi-site firms might be more able to absorb higher costs, but they might have an easier time moving workers out of the area with the wage increase.

2 thoughts on “When is the minimum wage too high?”