A long time ago, to start off “infrastructure week”, President Trump unveiled a plan to privatize America’s air traffic control (ATC)[1] system. He called the current system “antiquated” and “horrible” and said that through privatization the new system would be more efficient and safer. 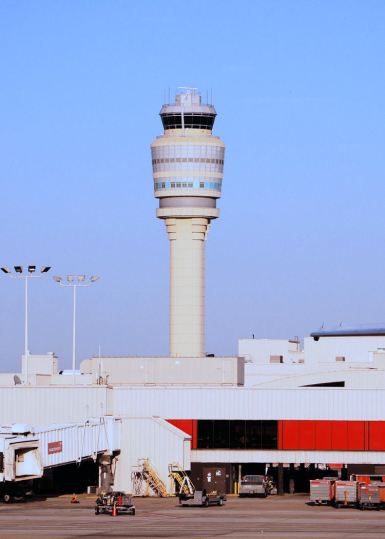 There are no interesting charts for this post. So instead we are going to look at the tallest control towers in america. This is the one in Atlanta, it’s the tallest.

Still, there are critics. Managing air traffic requires significant technology, and the technology being used at the FAA is old. Due to constraints on government procurement and uncertainty about budgeting, among other inefficiencies, the FAA has been slow to adopt new technology. The multi-billion dollar NextGen program, which is supposed to modernize ATC technology and change radar based systems to satellite based ones has suffered repeated setbacks and cost increases.  According to a 2016 report the costs and timing for the program remain “uncertain”.

The FAA has also has not always followed the efficiency trends of other ANSPs (Air Navigation Service Providers, the general term for an organization that conducts air traffic control).  Between 1997 and 2004, operating costs per aircraft movement at the FAA increased by 20%, while costs in Australia, Canada, New Zealand, the UK, and France declined between 5%-15%[2].

No one is suggesting that air traffic control should be managed by a private for-profit company beholden only to market forces.  Instead what President Trump is going after is splitting off the traffic management duties performed by the FAA into a separate nonprofit private corporation. This is not a new idea. In this US, there have been various proposals for privatizing air traffic control over the last few decades.  Internationally, quite a few nations have adopted various alternative organizational forms for their ANSPs, these include: complete government operation (US, France), separate government owned companies (Australia, Germany) , public private partnerships (UK),  or private companies (Canada). These alternative structures allow the organization to make business decisions and raise revenue and financing without going through government processes.

Canada’s NAV CANADA system is probably the most similar to the proposed system. Established in 1996, the private, non-profit, corporation manages without any direct government funding. Instead, funding comes from user fees, which depend on the type and size of aircraft and the distance traveled. NAVCANADA is managed by a board of directors that include representatives from the airlines, general aviation, the government, and unions.

The tower in Indianapolis is tall, just not as tall as Atlanta’s

As with restaurant bills, a lot of the fight about ATC is about who pays.  Currently the FAA is largely funded by the Airport and Airway Trust fund, which gets most of its funding from taxes on domestic passengers, international arrivals and departures, and jet fuel. Other funding comes from general government revenue.

In the proposed plan, revenue would come from user fees. Operators of aircraft, with exceptions for general aviation, would be charged for using air traffic control services. For Nav Canada the fees are based on aircraft type, size, distance flown in Canadian airspace, and other factors.

For most things , it’s best if those who use a service pay for it. Sometimes this is simply too difficult to do (national defense) or overly regressive (basic education).  For air traffic control, neither of these are true. It is certainly possible to fund with user fees, other countries do it. The users of Air traffic control are a relatively affluent segment of the population (air passengers, private pilots)  and the airline industry itself . Having them pay for the services they use seems like the right system.

A potential issue about funding is consistency. One advantage of government funding is that it is relatively unaffected by cyclical fluctuations or shocks (for example the decline in air traffic after 9/11). However, since the current system requires congressional approval is at the, perhaps greater, risk of political fluctuations such as government shutdowns and budget cuts. 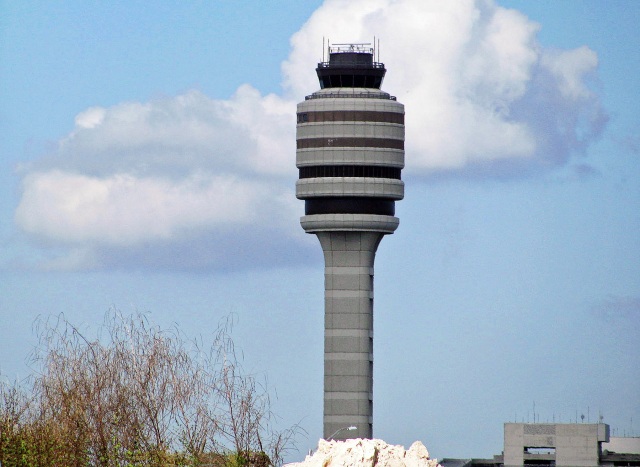 The control tower at the Orlando Airport. Even if we privatize air traffic control, it will still be shorter than the tower at Indianapolis.

America’s major airlines (minus Delta), the air traffic controllers’ union, and Airlines for America the airline industry trade group all support the plan. They would, the board of the new organization would largely be run by the airlines themselves.

This focus on commercial airlines has regional airports and General Aviation groups worried.  They fear that giving the power to an airline centered board, will allow them to prioritize commercial traffic and larger airports.

This seems likely, and if I were an advocate for general aviation, I would probably be opposed as well. Since general aviation is largely made up of recreational pilots, and business jets, this is not a group I would prioritize when designing policy.

Other countries have transferred the running of their air traffic control systems, either to private companies, public-private partnerships, or government owned companies. While the empirical data isn’t that robust (there just aren’t that many examples to draw from) corporatization comes off looking good, or at least fine.

According to a 2005 government accountability office report that looked at the commercialization of air traffic control services in the UK, New Zealand, Germany, Australia, and Canada, all had improvements in safety, operating costs, and use and adoption of new technologies following their transition away from a government model.

The most critical of these is safety. US airspace is extremely safe, there has not been a fatal accident of a US commercial passenger aircraft[3]  on american soil since the crash of Colgan Air Flight 3407 in 2009. For an ANSP, there are better measures of safety, such as the number of aircraft proximity incidents. For Germany, New Zealand, Canada, and the UK, proximity incidents declined following commercialization. Air traffic control systems for those nations also experienced reduced operating costs, ease in implementing new technology, and increases in efficiency. A 2009 study also found that safety had largely improved following commercialization.

All that is lovely, but the empirical data presented in these studies isn’t that robust.  Due to technological and process advances, I would expect air traffic control to be constantly improving, regardless of their operational structure. Perhaps if these ANSPs had remained in government hands they would have produced similar improvements.

Of course, just because a change worked somewhere else is no guarantee that it would work here. Due to the huge amount of traffic and unusual prevalence of general aviation, United States airspace is, potentially, unique.

Not robust does not mean untrue. There is little evidence to show a consistent decline in safety, efficacy, or efficiency flowing a change of structure. Even if the counterfactual is weak, there is more evidence of improvement than there is of decline.

If I were forced at gunpoint to decide between supporting the proposed plan, or keeping the current system I would probably go with the proposal. Gun wielding questioners aside, I don’t have the expertise in air traffic control, or the FAA, to properly evaluate the specifics of the proposed plan. I do not know if it US would be best served by the proposed model, or by a government owned company, or by simply reforming the existing system.

I am in favor of separating traffic management from the FAA. The current structure of air traffic control makes it harder to implement technological changes and improvements. User fees seem a better system to fund air traffic control than taxes-even those on aviation fuel. Efforts will need to be made to make sure there are sufficient reserves in the case of an industry downturn, and that these fees do not unfairly target certain users.  Ultimately, the evidence from other countries who have separated their air traffic control systems, seems more positive than negative.

I do think the proposed system gives too much power to the airlines. I don’t trust the American airline industry and suspect that they already have too much power. I am less sympathetic toward the concerns of general aviation, a group I am not particularly interested in subsidizing.

At the time of this writing, The current plan does not seem to be moving forward in the senate, a fact which I am mostly ambivalent about. Still, it does seem like Air Traffic Control system in the US could be improved, and removing it from under the FAA’s wing[4] is probably a good place to start.

Why is flying in Canada so expensive?

Should airlines be allowed to overbook?

Why are airfares so volatile?

The Atlantic: Why Trump Wants to Privatize Air Traffic Control

The Atlantic : Is Trump’s Plan to Privatize Air Traffic Control a Good Idea?

The Hill: The case against privatizing the nation’s air traffic control system

View from the wing

GAO: Experts’ and Stakeholders’ views on Key Issues to Consider in a Potential Restructuring

2 thoughts on “Should we Privatize Air Traffic Control?”