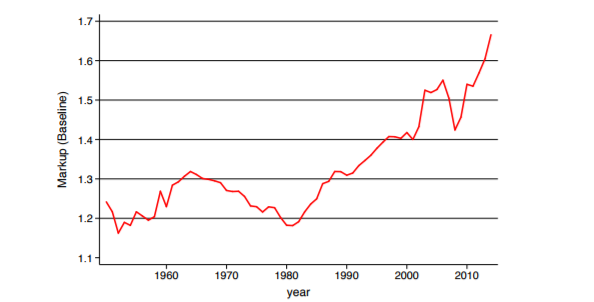 The Opposite of Monopoly

Perhaps thanks to the horrible, but pervasive, board game, most of us are familiar with the idea of a monopoly. A single seller that completely dominates a market and who can, to the detriment of everyone else, set prices at will.

Monopoly is an example of Market Power, a situation where the enforcement mechanism of competition is lacking.  Those who venture a little bit further might stumble into an etymologically rich world of Monopsony, Oligopoly, and Oligopsony[1]. The opposite of a monopoly is perfect competition. Perfect competition is an idyllic world where anyone can enter a market free of cost, and everyone is omniscient. It is, much like our executive editor, mostly fictitious.

Like many things that don’t quite exist, perfect competition is useful. There are many requirements needed for perfect competition. Fundamental among them is lots of buyers and lots of sellers for each good. This multitude of buyers and sellers know what everyone else is up to. They know what prices everyone else is charging. Should one of these sellers try to set a price above what everyone else is charging, all the buyers will not buy their product, forcing the seller to drop their price back to the market price.

Monopolies are troublesome in lots of ways. Most significantly, they raise prices, they do this by throttling the output they produce. Cartels, such as OPEC, try to do the same thing.

The monopolist can raise prices without fear of customers purchasing from someone else. In nearly all cases, a monopolist will raise prices. At these higher prices people will purchase fewer goods, so the fundamental result of monopoly is reduced production and increased prices.

Competition does not come only from current sellers, but from the ability of new sellers entering the market. Even if a monopolist has no current competition, in markets that are easy to enter, high prices can be deterred by the threat of new entrants.

Perfect competition is mostly useful as a comparison to other market structures. One of the main differences between perfect competition and monopoly is that in perfect competition there are no profits. Business in a perfectly competitive market make just enough revenue to cover their costs[2]. If they made any more than that new firms would come in and drive the price back down.

Actual monopolies are rare, and the ones that are around are usually state sanctioned, such as natural or patent monopolies. Perfect competition is probably rarer still, so most markets exist somewhere between the two extremes. As is illustrated by this illuminating diagram.

Figuring out where things sit on that spectrum matters. In fact, it might be just about the most important question in economics today.

Rising inequality and decreased dynamism are among the problems facing the US economy. A couple of economists named Jan, think that market power is related to these problems.

Markups over time. Y axis is the ratio of the final price to cost of inputs, i.e. the markup. All these charts from: http://www.janeeckhout.com/wp-content/uploads/RMP.pdf-Markups

This chart is the main result of the paper. It shows markups (the ratio between cost of inputs and how much a product sells for). From about 1950 until 1980 markups were relatively flat. After 1980 they started to rise, and have continued to rise ever since. They have risen from 18% over marginal cost in 1980 to 67% today.

The Markups are consistent across industries, and (perhaps surprisingly) tend to be larger in smaller firms[3]. In addition the bulk of the markups come from a minority of firms.

A monopolist can charge more than it costs to produce their products. This would be reflected in a higher markup. Markups are consistent with greater market power, but they are not necessarily proof of it. Other things, such as a rise in fixed costs, could result in the same thing. For example, tech companies might have high fixed costs (development, infrastructure) but once they release their product the marginal cost of supplying it is near zero.

Better evidence of market power would be a rise in profits[4]. There is evidence that this has occurred, and occurred in a way that aligns with the rise in markups.

A significant trend of the last few decades has been the decline of national income going to labor. This is a big deal, it is associated with increases in inequality and stagnant wages, among other ills. It is not as simple as workers being replaced with machines, as the decline has not lead to a greater share going to capital.

This is consistent with the market power story. The greater the markup is, the smaller share labor is going to receive. A monopoly results in both decreased output and increased prices. Decreased output requires both less labor and less capital. The (inverse) trend of markups matches the decline in labor share of income well.

Questions remain.[5]  Assuming the above is all correct, we still need to know why markups/market power started to increase around 1980. A question that Jan and Jan do not get into. This is more than a little bit important as different causes will require different remedies.

The second is output. The mechanism by which Monopolies do their damage is through the increase in prices and the reduction in output. There isn’t much evidence that output has declined. Although, as Noah Smith points out, we don’t know what output would have been in the absence of market power.

Especially, when operating at the sub-monopoly level, Market Power is a particularly insipid problem. It can manifest slowly, and become very difficult to remedy-those with market power likely have both a strong motivation to keep it, and the political power to make that happen. Market power might be especially hard to disrupt if it’s the rise is due to technological, or other fundamental changes, as opposed to changes in policy.

The mere existence of the problem implies that current antitrust regulation has not been effective (although fines have been on the rise) perhaps it could be tweaked or strengthened to be more effective.

Policing monopoly is not necessarily costless, there is a risk that inefficient firms that should be allowed to succumb to competitors could be artificially buoyed by anti-monopoly regulation. Still, we should be much more careful about all kinds of mergers, both before and after they happen.

Much about the increase in market power remains unsettled. Its rise should still unsettle.

[2] These costs include the time, energy, and risk of running the business.

[3] Although since this data is for public companies, they likely aren’t that small.

[4] Economists mean something other than what everyone else means when they say profits. Which complicates matters somewhat.

[5] Don’t they always. On my tombstone, it will say “Questions remain”. Perhaps it already does.

How much consumer surplus does Uber Generate?

The Rise of Market Power and the Macroeconomic Implications. Jan De Loecker and Jan Eckhout. August, 2017.

2 thoughts on “Are Monopolies Ruining Everything?”